Somerset Pumps were called in last year to inspect the private water supply system at Rodway Farm, Cannington, which is part of Bridgwater College.  The College Farm is a commercial operation which currently extends to over 180 hectares, providing arable, pasture and conservation areas, while being home to a number of specialist livestock enterprises.  It currently has a milking herd of 250 Holsteins

The water system is supplied by a borehole pump filling a storage tank, with two surface booster sets distributing water around the site for cattle drinking troughs, dairy and general cleaning duties.  Over the last few years the amount of water available from the borehole pump had significantly reduced, and this, coupled with problems with the booster sets, had resulted in a shortage of water.  This has had to be made up from mains water at significant expense. 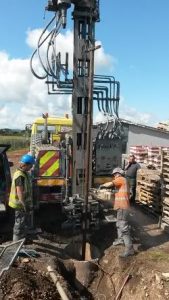 The farm manager asked us for a quotation to refurbish the whole system.  This would eventually include replacement of the borehole pump and two storage tanks, modification of pipework and a complete rebuild of the two booster sets.

The old borehole pump was lifted for inspection.  This required the services of Stunt Drilling Services who lifted 30 metres of 3” steel pipe using their lorry mounted rig.  The pump, which was approximately 20 years old, was found to be encrusted with silt and iron deposits which had resulted in significantly decreased performance.  It was therefore decided to fit a new replacement unit which was installed on 63mm MDPE pipework connected to a new 3,300 litre storage tank.  The opportunity was also taken to install a condition monitoring control panel to provide dry run protection.

Each of the twin pump booster sets were modified to operate in duty/standby mode with new pressure switches and expansion vessels together with reconfigured pipework. A new high level storage tank was also installed to improve the distribution of water around the system.