A Leisure Development site in M 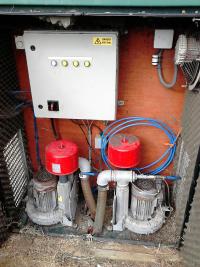 onmouth contacted us recently, after their Sewage treatment Plant failed a routine discharge test of their final effluent.  The report from the Environment Agency failed due to a high percentage of dissolved solids. (‘Dissolved solids’ refer to any minerals, salts, metals, cations or anions dissolved in water.  These include anything present in water other than the pure water (H2O) molecule and suspended solids), suspended solids are any particles/substances that are neither dissolved nor settled in the water, these can be harmful to the environment.

We recommended a full service of the plant as well as an investigation of why the final effluent is not meeting the Environment Agency Requirements.

The plant and controls were serviced and the final discharge chamber was found to have a large amount of silt in the bottom of the tank around the sludge return pumps, with suspended solids within.  On further investigation by the maintenance team on site, we discovered that the primary tank had only ever been tankered.

Failure to periodically tanker out the primary and final effluent chambers can build up a high percentage of solids. This can also cause the soak away to block.

Our recommendation is to tanker out the final effluent tank & clear the sludge from the bottom.  This will clear all of the suspended solids from the final tank
We will then leave the plant to treat the sewage which will flow into the cleaned discharge tank. Once the Environment Agency have returned and re-tested we will monitor results further.
If the results are still too high, we will alter the sludge return timer settings.  By increasing the sludge returned from the final discharge tank to the primary tank we will restart the process of treating the effluent and dilute the incoming sewage.

Following a re-test by the Environment Agency the results for the Discharge Report where within the sites parameters.